Dr. Martin Luther King Jr. spent his final full day on earth advocating for the rights of workers in what’s now known as his “I’ve Been to the Mountaintop” speech. 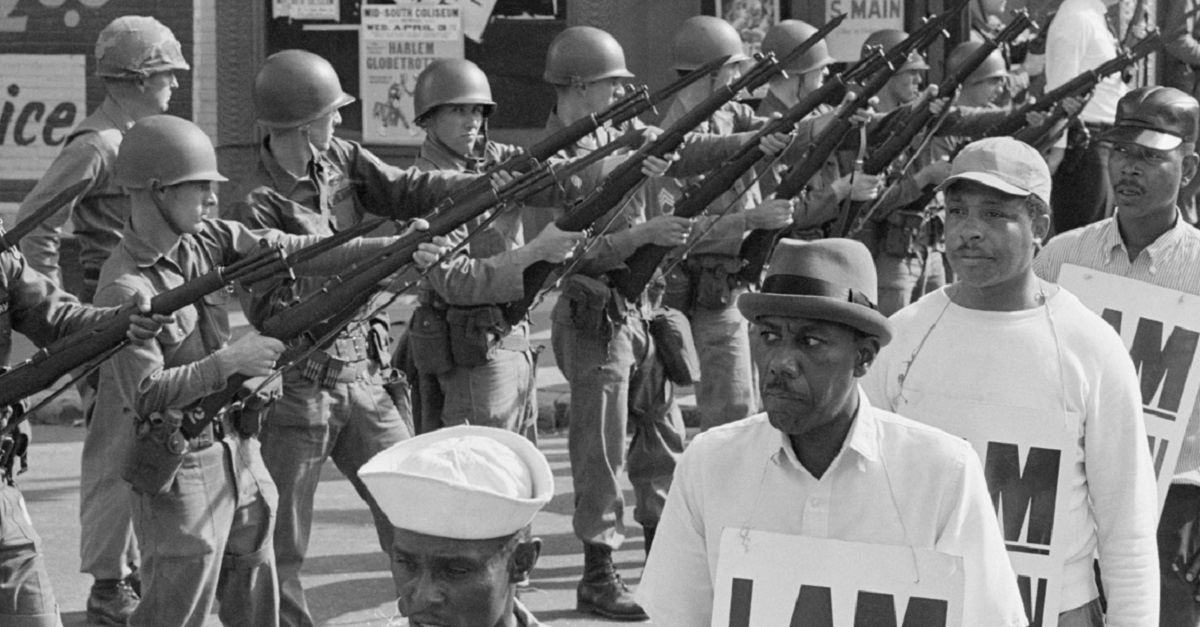 It was April 3, 1968, and King stood up at the Mason Temple in Memphis, Tennessee, and spoke in support of the city’s 1,300 sanitation workers, who were then on strike fighting for better safety standards, union recognition, and a decent wage — a work stoppage that was inspired partly by the deaths of Echol Cole and Robert Walker, who had been crushed to death by a garbage truck.

“We've got to give ourselves to this struggle until the end,” he told the assemblage. “Nothing would be more tragic than to stop at this point, in Memphis. We've got to see it through. And when we have our march, you need to be there. Be concerned about your brother. You may not be on strike. But either we go up together, or we go down together.”

His emphasis on supporting striking workers helped to illustrate just how firmly enmeshed the labor movement was with the greater struggle for civil rights. The 1963 March on Washington for Jobs and Freedom (generally known as the March on Washington) was organized by a coalition of six organizations, known as the Big Six — the Student Nonviolent Coordinating Committee, the Congress on Racial Equality, the Southern Christian Leadership Conference, the National Association for the Advancement of Colored People, the Brotherhood of Sleeping Car Porters, and the National Urban League. The Brotherhood of Sleeping Car Porters was the first predominantly black labor union to be chartered by the American Federation of Labor (AFL) and was founded by A. Philip Randolph, a major leader in both the civil rights movement and the wider American labor movement. A labor union’s purpose is to improve wages, hours, and working conditions within a workplace, and it uses workers’ collective power to bargain for a legally binding contract between them and their employer — and given the rampant discrimination and racism that black workers faced, they had much to gain by organizing.

In 1941, Randolph joined forces with organizer Bayard Rustin — one of the civil rights movement’s lesser-known but pivotal figures, whose status as a gay man often saw him unjustly relegated to behind-the-scenes roles — and threatened to bring a 100,000-person march to Washington unless President Franklin D. Roosevelt ended racial segregation in the defense industries. They won that battle, and in 1955, Rudolph became the vice president and member of the executive council of the AFL-CIO. His tenure there helped to spotlight one of the enduring issues within the wider labor movement: racism and discrimination. At the time of the Brotherhood’s founding, in 1925, half the affiliates of the AFL barred black people from membership.

In 1963, Rudolph and Rustin led the planning for the March on Washington. They applied the lessons they’d learned 20 years prior, swelling the ranks to at least 250,000 by encouraging nonblack participants to come. By then, Rudolph had been organizing black workers and fighting against occupational Jim Crow laws for over 50 years.

In 1965, he and Rustin founded the A. Philip Randolph Institute to “continue the struggle for social, political and economic justice for all working Americans,” as their website says. As Randolph once said, “Justice is never given; it is exacted and the struggle must be continuous for freedom is never a final fact, but a continuing evolving process to higher and higher levels of human, social, economic, political and religious relationship.”

These men were not alone in this effort; women domestic workers organized by Dorothy Lee Bolden, the founder of the National Domestic Workers Union of America and a neighbor of Dr. King, were a largely unsung force in the fight for labor and civil rights. They built on the groundwork laid by Dora Lee Jones and the Domestic Workers’ Union she helped to establish in Harlem in 1934 to take their rightful place in the struggle.

Black workers have been systematically disenfranchised for centuries, even by progressive organizations like labor unions, so it’s important to recognize that they have been organizing and taking collective action since before the Civil War by way of benevolent associations and worker unity organizations. Prior to desegregation, black union members were shut out of many major labor actions. Black railroad workers took part in the Great Railroad Strike of 1877, but when they sought to join the Pullman Strike of 1894, iconic socialist Eugene Debs, leader of the American Railway Union, was unable to convince the white members of his union to accept them. During the Mine War in Appalachia that took place between 1900 and 1921, the United Mine Workers of America were far more welcoming to black miners than most of their affiliated unions, but the black miners still encountered prejudice and racism from their white coworkers.

In what may be a lone example of interracial solidarity in the early 20th-century labor movement, racial equality (and gender equality) was written into the constitution of the Industrial Workers of the World (IWW) industrial union when it was founded in 1905; the very first bylaw read, “No workingman or woman shall be excluded from membership in local unions because of creed or color.” This was a marked contrast from the discriminatory policies held by more-traditional trade unions at the time and for many years afterward; the fact that one of the IWW’s founding members was Lucy Parsons, a woman of color and anarchist organizer, surely had something to do with it.

In 1850, Frederick Douglass helped to organize one of the country’s first black labor unions, the American League of Colored Laborers, in response to the difficulty that black workers had in joining white-led unions. In 1869, the first national black labor union, the Colored National Labor Union, was established and paved the way for ensuing black-led labor organizations. Today, the Coalition of Black Trade Unionists follows in that tradition, representing more than 50 different international and national trade unions and acting as a bridge between the labor movement and the black community.

While it is an unquestionable fact that there were many racist union officials and rank-and-file workers spread throughout the movement, others in the labor movement chose to fight side by side with black workers in the pursuit of justice. After the two men met and became fast friends in 1959, United Automobile Workers (UAW) president Walter Philip Reuther marched alongside Dr. King at Selma and Birmingham and bailed him out of jail. The UAW was a huge supporter of the March on Washington as well as other civil rights actions: In the 1950s, the union donated funds to the Montgomery Bus Boycott and paid bail for Freedom Riders arrested in 1961. The union offered Dr. King and the other organizers their union headquarters as a base of operations to plan the 1963 march and chartered trains, buses, and planes to get workers there.

AFL-CIO president George Meany wavered in endorsing the march, but when more than 800 protesters were attacked by police and arrested during civil-disobedience actions on April 7, 1963, prior to the march, the UAW sent $160,000 in bail money to free them. Reuther himself was the only white person to speak from the podium at the march itself, using the platform to demand freedom for the nation’s “second-class citizens,” frame civil rights as “a matter of common decency,” and make fiery allusions to the evils of racist government officials. Following Dr. King’s assassination, Reuther marched alongside Coretta Scott King in Memphis — and donated $50,000 to the striking sanitation workers that Dr. King had worked so hard to help.

Now, half a century past the March on Washington, union members still face discrimination at work and out in the world. The modern labor movement needs to look to its past for inspiration and do more to throw its considerable weight behind fighting for the rights of marginalized workers who are under threat from our current presidential administration: workers of color, immigrant workers, undocumented workers, incarcerated workers, sex workers, and fast-food workers. As Dr. King said, “If I do not stop to help the sanitation workers, what will happen to them?"

Substitute in any one of those struggling workers mentioned above, and ask yourself the same question.